June Scobee Rodgers, Founding Chairman for the Challenger Center for Space Science Education, has been selected by the Astronauts Memorial Foundation (AMF), the National Aeronautics and Space Administration (NASA) and the Space Foundation as recipient of the 2015 Alan Shepard Technology in Education Award. The award is given annually in recognition of creative and innovative use of technology by K-12 educators, or district-level education personnel. 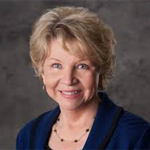 The award will be presented to Rodgers during the opening ceremony on April 13 at The Broadmoor in Colorado Springs, Colo., USA. The ceremony is co-sponsored by Northrop Grumman, and the award presentation will be followed with a by-invitation reception co-hosted by Florida State Senator Thad Altman, who also serves as AMF’s President and CEO.

About June Scobee Rodgers
Rodgers has taught every grade-level from kindergarten through college. As Founding Chairman for the Challenger Center for Space Science Education, she has appeared on numerous national television programs promoting innovative educational partnerships, and has served on the President’s National Advisory Council on Education. Each year more than 500,000 students participate in programs at the nearly 50 Challenger Learning Centers located throughout the United States, Canada, the United Kingdom and South Korea.

Rodgers holds a Ph.D. from Texas A&M University, and a Master’s from Chapman College, both in curriculum and instruction. She also attended San Antonio Community College, Charleston Southern University and received an Honorary Doctor of Science Degree from the University of Leicester, UK.

Rodgers is the widow of Francis Richard “Dick” Scobee, who was killed commanding the Space Shuttle Challenger on Jan. 28, 1986, after booster failure during launch of the STS-51-L mission.

The Space Symposium is the annual gathering of all sectors of the global space community, to be held April 13 – 16 at The Broadmoor, and includes programs for select educators and students. See the agenda, speakers and registration information at www.spacesymposium.org.