During 2014, the remarkable success of the Rosetta Comet Mission, led by the European Space Agency (ESA), fascinated followers around the world. In recognition of this astonishing accomplishment, the Space Foundation will present the Rosetta Comet Exploration Team with the 2015 John L. “Jack” Swigert, Jr., Award for Space Exploration. 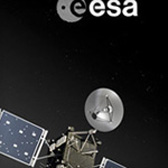 “The 2015 Swigert Award recognizes the ESA-led Rosetta Comet Team’s successful, 20-year mission of exploration, which traversed more than six billion kilometers through the solar system before arriving at Comet 67P/Churyumov-Gerasimenko in August 2014, and successfully placed the Philae lander on the surface of the comet on November 12, 2014,” said Space Foundation Chief Executive Officer Elliot H. Pulham. “Both Rosetta and Philae accomplished all science objectives, despite the extreme difficulty, complexity and risk profile of the mission.”

While not the first spacecraft to visit a comet, Rosetta was the first to orbit one and the first to send a lander to a comet’s surface. Rosetta’s instruments are studying the comet from orbit, and it is hoped that Rosetta’s findings will help scientists uncover some of the mysteries about how our solar system was formed.

The 2015 Swigert Award will be presented April 13 during the opening ceremony of the 31st Space Symposium at The Broadmoor in Colorado Springs, Colo., USA. The ceremony is co-sponsored by Northrop Grumman, and the award is given annually to the person or organization that has made the most significant accomplishments in advancing the exploration of space during the previous year.

About the Space Symposium
The Space Symposium is the annual gathering of all sectors of the global space community, to be held April 13 – 16 at The Broadmoor in Colorado Springs. Visit www.SpaceSymposium.org for secure online registration and complete conference information.