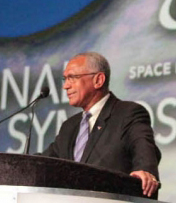 The dinner will be held on Tuesday, April 14, at The Broadmoor, and is co-sponsored by Lockheed Martin, with corporate host Wanda A. Sigur, Vice President and Deputy, Civil Space, Lockheed Martin Space Systems Company.

About Bolden
Bolden is the 12th NASA Administrator, and began his duties in 2009. Previously, he was Chief Executive Officer of JACKandPANTHER LLC. His 34-year career with the Marine Corps included 14 years as a member of NASA’s Astronaut Office.

After joining the office in 1980, he traveled to orbit four times aboard the Space Shuttle between 1986 and 1994, commanding two of the missions. His flights included deployment of the Hubble Space Telescope and the first joint U.S.-Russian shuttle mission. Bolden’s NASA astronaut career included technical assignments as lead astronaut for vehicle test and checkout at the Kennedy Space Center and Assistant Deputy Administrator at NASA Headquarters.

A graduate of the U.S. Naval Academy, Bolden flew more than 100 combat missions over North and South Vietnam, Laos and Cambodia. He later earned a Master of Science degree in systems management from the University of Southern California. Bolden’s many military decorations include the Defense Superior Service Medal and the Distinguished Flying Cross. He was inducted into the U.S. Astronaut Hall of Fame in 2006.