Hohmann for the Holidays

Astronauts Frank Borman and James Lovell started their 14-day Earth orbit mission when their Gemini VII spacecraft roared from the launch pad in early December. Both astronauts and the rest of NASA’s teams had been preparing for that Dec. 4 launch for months, but during their preparations there had been a small wrinkle: Gemini VI, which was supposed to have launched in October but hadn’t.

The teams proceeded, then, with a new plan. A plan concocted just a month before, with teams spending most of November preparing for Gemini VII’s launch, and preparing for what needed to happen afterward — getting the pad cleared and ready to launch another Gemini spacecraft just eight days after Gemini VII’s ascent. NASA was attempting to launch Gemini VI again (this time called VI-A), with the aim of the spacecraft rendezvousing with Borman and Lovell’s capsule using Hohmann Transfer orbits. Both spacecraft were on a mission, informally known as “The Spirit of ’76.”

By Dec. 12, the Gemini VI-A spacecraft was ready for launch. Walter Schirra and Thomas Stafford, the original Gemini VI astronauts, were aboard and ready to conduct their rendezvous mission. At T-zero, the engines ignited — and then shut down. The rocket’s computer, detecting a problem with the space launch vehicle, automatically shut down the system nearly a second and a half after both engines had ignited. The astronauts would have been well within procedure to eject from the capsule. The Titan launch vehicle they were sitting on was full of fuel and oxidizer, which was a very dangerous combination under the best circumstances. But Schirra and Stafford chose to wait and see. Their ability to remain calm under pressure ultimately allowed their mission to succeed. 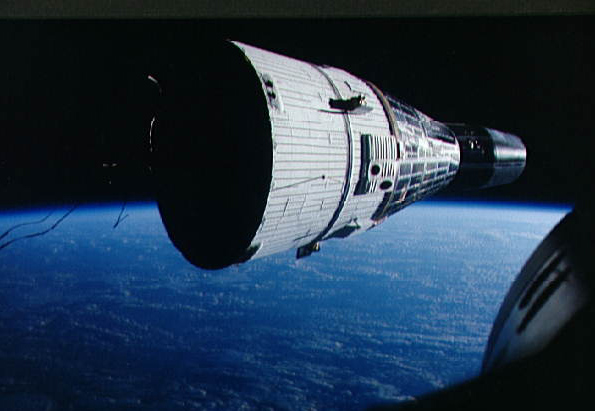 Three days later, Gemini VI-A was ready to launch again. The primary source of the abort was an overlooked plastic dust cap. With cap removed, anomalies corrected, and the spacecraft and launch vehicle reset and recycled, Gemini VI-A rose into the sky at 13:37 GMT. The rendezvous mission with Gemini VII was a go.

About an hour and a half after the launch, Schirra and Stafford began maneuvers to meet with Borman and Lovell’s capsule. A little over four hours later, Gemini VI-A’s crew made history as they rendezvoused with Gemini VII, which floated only 40 meters (43.75 yards) away. Both spacecraft appeared to be linked, with no movement between them as the Earth’s surface rotated underneath — the first time in history any manned space vehicles approached and then stayed close to one another while orbiting the Earth. 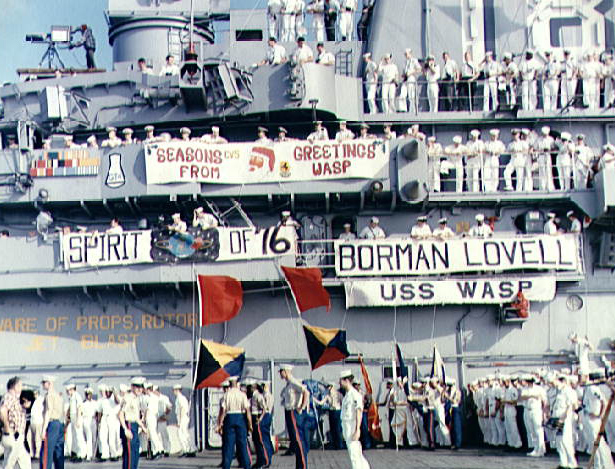 The two capsules continued closing in maneuver testing for the next three orbits, with Gemini VI-A approaching Gemini VII as close as .30 meters (slightly less than a foot). After these maneuvers, Gemini VI-A pulled away and deorbited, safely splashing down nearly 26 hours after launching. Gemini VII, after its crew had spent over 330 hours in space, came down safely in the Pacific on Dec. 18. It was a successful mission.

Schirra, Stafford, Borman, and Lovell proved during the “Spirit of ’76” mission that rendezvous in space could be done, safely. The rendezvous was a key demonstration proving the viability of Apollo’s mission plans for the lunar rendezvous between capsule and lunar module. Four brave men, traveling through the darkness of space, following their own stars, meeting above the Earth, then coming back safely. What was history-making then was eventually used in Apollo lunar missions, and is routine in space operations today. Similar maneuvers using Hohmann Transfer orbits bring spacecraft close to the International Space Station, docking with the station safely, supplying cargo and crew. Future missions to Mars will likely use Hohmann Transfer orbits to travel from Earth to Mars.