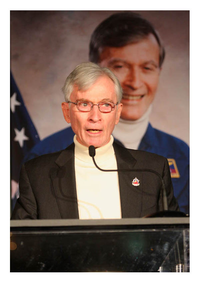 That was how former Gemini, Apollo, and Space Shuttle Astronaut Captain John W. Young, USN (Retired), framed his brief, but powerful acceptance speech April 13 when he was awarded the Space Foundation’s highest honor – the General James E. Hill Lifetime Space Achievement Award. Young called for the rapid industralization of the Moon and Mars, saying that we “owe it to our kids and grandkids” to explore a settle new worlds for them. He said that there are many reasons to explore space, but chief among them is the attititude of “let’s go do it.”

Space Foundation Chairman of the Board Bill Ballhaus, Ph.D., presented the award at a luncheon honoring Young, sponsored by Raytheon. Bill Hart, vice president, space systems for Raytheon Space and Airborne Systems, was the luncheon host.

To see Young’s acceptance speech and a video chronicling his career, click here.