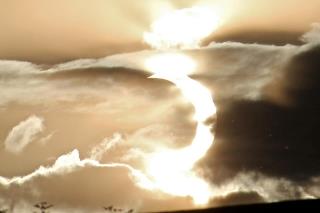 A magnificent annular solar eclipse occured May 20, 2012, offering quite a show for skywatchers. Although not visible everywhere, this rare celestial event could be seen from East Asia, Japan and across the western United States. Other areas of the U.S. saw only a partial eclipse. A solar eclipse occurs when the Moon passes between the Sun and the Earth, temporarily blocking the Sun from view. During an annular solar eclipse, the Moon appears slightly smaller than the Sun, leaving a thin ring of sunligt visible known as a “ring of fire.”

Astronomer Stuart Robbins created a unique time lapse perspective of the solar eclipse with his photographs taken in Albuquerque, N.M.

Lots of other great photos of the eclipse can be found at:

And even some video of the eclipse as seen by satellites in outer space from: