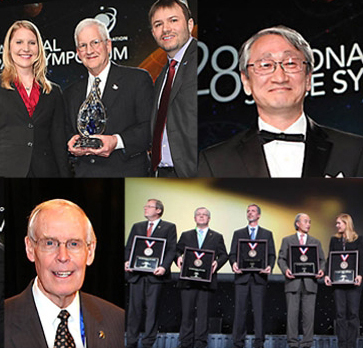 Nominate for the Hill Award by Oct. 12

Oct. 12 is the deadline to submit nominations for the Space Foundation's highest honor, the General James E. Hill Lifetime Space Achievement Award. The award recognizes outstanding individuals who have distinguished themselves through lifetime contributions to the welfare or betterment of humankind through exploration, development and use of space, or through use of space technology, information, themes or resources in academic, cultural, industrial or other pursuits of broad benefit to humanity.

The award will be presented at a special luncheon on April 10, 2013, during the 29th National Space Symposium, at The Broadmoor Hotel in Colorado Springs, Colo.

Any person may nominate a candidate for the General James E. Hill Lifetime Space Achievement Award, however, individuals may not nominate themselves. The nomination should be in the form of a letter, not to exceed two pages, addressed to:

The Space Foundation Board of Directors will make the final selection.

The general public may submit nominations until Oct. 31, 2012, for the following three annual space awards, which will also be presented at the 29th National Space Symposium. Send nominations with details about why the nominee should be considered and contact information for the person submitting the nomination to to [email protected].

The John L. "Jack" Swigert, Jr., Award for Space Exploration honors astronaut Jack Swigert, a Colorado native who served with retired U.S. Navy Captain James A. Lovell, Jr., and Fred Haise on the legendary Apollo 13 lunar mission, which was aborted en route to the Moon after the perilous rupture of an oxygen tank. The Space Foundation, founded in 1983 in part to honor Swigert's memory, created the Swigert Award in 2004 in tribute to his lasting legacy of space exploration. The award is given to an individual or organization for extraordinary accomplishment in the field of space exploration. To be eligible, the nominee must have either accomplished or completed the activity or completed the analysis of the activity during the 2011-2012 timeframe.

The Space Achievement Award is presented annually to an individual or organization for significant contributions in advancing the development or utilization of space. To be eligible, the nominee must have made a major contribution to space, such as releasing a new technology, significantly improving the performance or capabilities of an existing technology, creating new opportunities for space employment or advancement, or significantly advancing or improving space policy within the 2011-2012 timeframe.