WASHINGTON, D.C. (Dec. 4, 2012) – In a report released today, the Space Foundation made a number of recommendations for strengthening the focus, oversight and funding of the National Aeronautics and Space Administration (NASA) and strengthening the U.S. civil space program. 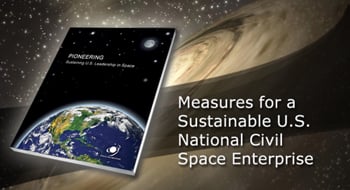 Among the major changes recommended in PIONEERING: Sustaining U.S. Leadership in Space, which was unveiled today in Washington, D.C., are:

The 70-page report and a separate executive summary are now being distributed to policymakers, industry leaders and media by the Space Foundation, an independent non-profit advocacy and education organization committed to advancing space exploration and utilization.

Based on in-depth historical research and interviews with nearly 100 space leaders, PIONEERING: Sustaining U.S. Leadership in Space addresses issues within the agency and makes recommendations on its governance and funding.

Commenting on the report findings, the Space Foundation Chief Executive Officer Elliot Pulham said, “Our research revealed that NASA is struggling to find its way as a result of years of circumstance and mixed signals from political leadership. But, the fundamental issue is the muddled — or non-existent — understanding of why NASA exists and what it should be doing.”

Pioneering Doctrine Lays Out Framework
Pioneering — the proposed purpose for NASA — is defined as being among those who first enter a region to open it for use and development by others.

The report lays out a “Pioneering Doctrine” that will enable NASA to bring a greater portion of space within the sphere of regular human activity, such as commercial endeavors, research or travel. It stipulates the four phases of space activity in which the agency should engage:

Recommendations for NASA Focus and Sustainability
“NASA is an exceptional agency in a tremendous predicament,” said Pulham. “The agency’s accomplishments have fundamentally changed how the human species interacts with our universe. But, sadly, because of many factors, NASA has too many mandates and too little political and financial stability.

“Our intent is to spark a well-informed conversation on how best to put NASA on a sustainable, long-term course to restore the U.S. role as a leading space nation,” he said. “Although some of our recommendations go against the status quo, they are reasonable and straightforward.”

How to Get More Information
To download a copy of the full PIONEERING: Sustaining U.S. Leadership in Space report or the executive summary, go to www.spacefoundation.org/research/pioneering. Inquiries should be directed to [email protected].