In 2014, the Space Foundation will honor Hadfield with the Douglas S. Morrow Public Outreach Award for his use of social media to engage millions of followers while chronicling life aboard the ISS. In addition to his musical performances from space, Hadfield’s YouTube videos have included demonstrations of eating, sleeping and trying to cry in space.

The award will be presented on May 19 during the opening ceremony of the Space Foundation’s 30th Space Symposium, co-sponsored by Northrop Grumman, and held at The Broadmoor Hotel in Colorado Springs, Colo., USA. 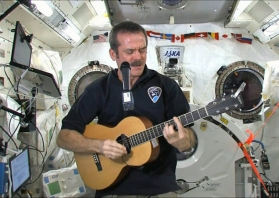 About Hadfield
The first Canadian to walk in space, Hadfield was accepted into the Canadian astronaut program in 1992, and was assigned by the Canadian Space Agency to the NASA Johnson Space Center. In 1995, Hadfield served as mission specialist on STS-74, NASA’s second space shuttle mission to rendezvous and dock with the Russian Space Station Mir.

In April 2001 he flew again on STS-100 to the ISS, where he walked in space and helped install the Canadarm2. In December 2012, he flew for a third time aboard Soyuz TMA-07M and joined Expedition 34 on the ISS. He was a member of this expedition until March 2013 when he became the commander of the ISS as part of Expedition 35. During this mission he gained international popularity with his videos of life on the ISS, his photos of Earth and his commentary on Facebook and Tumblr, and to more than one million Twitter followers.

Hadfield retired as a Colonel from the Canadian Air Force in 2003 after 25 years of military service.

About the Morrow Award
The award’s namesake was an Academy Award winning writer and producer, space advocate and early member of the board of directors of the Space Foundation. Designed to recognize those who have made significant contributions to public understanding of, and support for, space programs, the Morrow Award has a long list of distinguished recipients, including: astronaut Eileen Collins; actor/director Tom Hanks; the X PRIZE Foundation; space artist Robert T. McCall; the late Gene Roddenberry and Majel Barrett Roddenberry; the crew of Space Shuttle Mission STS-95; NASA’s Jet Propulsion Laboratory; actor/director Leonard Nimoy; space journalists Jay Barbree, Marcia Dunn and William Harwood; the NASA social media team; and in 2013 Bill Nye.

About the Space Foundation
Founded in 1983, the Space Foundation is the foremost advocate for all sectors of space, and is a global, nonprofit leader in space awareness activities, educational programs and major industry events, including the annual Space Symposium, all in support of its mission “to advance space-related endeavors to inspire, enable and propel humanity.” Space Foundation world headquarters in Colorado Springs, Colo., features a public Discovery Center including the El Pomar Space Gallery and the Northrop Grumman Science Center featuring Science On a Sphere®, and is a member of the American Alliance of Museums. The Space Foundation has a field office in Houston, and from its Washington, D.C., office, conducts government affairs, publishes The Space Report: The Authoritative Guide to Global Space Activity and provides three indexes that track daily U.S. stock market performance of the space industry. Through its Space Certification™ and Space Technology Hall of Fame® programs, the Space Foundation recognizes space-based technologies and innovations that have been adapted to improve life on Earth. Visit www.SpaceFoundation.org, follow us on Facebook, LinkedIn and Twitter, and read our e-newsletter Space Watch.