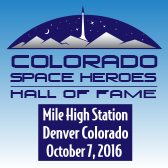 It is time to honor and celebrate those who have advanced space-related endeavors to inspire, enable and propel humanity, and Colorado’s role in inspiring the next generation of space heroes.

To honor the astronauts, aerospace executives, government officials, military leaders and others who have contributed most significantly to the development and success of Colorado’s space economy, the Space Foundation has created the Colorado Space Heroes Hall of Fame. The first honorees were announced in August, and will be recognized at a black tie gala, to be held in Denver on Oct. 7, during World Space Week. The honorees are:

The past is our history and the vehicle that has carried us to this moment. Our future resides in the schoolchildren who visit the Space Foundation Discovery Center each week, but they need the vehicle to succeed. Our robust and innovative Space Foundation education programs are that vehicle. Learn more by visiting the Colorado Space Heroes Hall of Fame webpage here.