"Remote Sensing -- Enabling our Future" is the theme for World Space Week 2016, held annually October 4-10. The Space Foundation is a proud sponsor of World Space Week, and will offer activities celebrating achievements in space and in support of science, technology, engineering and math (STEM). 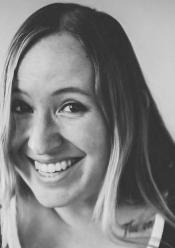 On Oct. 5, the Space Foundation will invite classes from its Teacher Liaison program to the U.S. Air Force Academy during World Space Week for a special presentation with Erin Macdonald, Ph.D., Systems Engineer with Stellar Solutions, Inc. Dr. Macdonald (pictured) is also a space science lecturer who is passionate about giving talks around the world on the intersection of science and science fiction. She is currently the Education Manager for World Space Week. Her background is in gravitational waves and general relativity and includes education at museums and community colleges.

At the Discovery Center

The Space Foundation Discovery Center in Colorado Springs is a space, science and technology attraction, open to the public year-round and a destination for STEM-based school field trips. For World Space Week, the Discovery Center has prepared a special exhibit that explores remote sensing -- what it is, how it is used, how it is changing what we know about our planet and solar system and how it is enabling exploration and problem solving for the future.

On Oct. 5, the monthly Homeschool Day at the Discovery Center will offer activities centered around the World Space Week theme of remote sensing.

The last Space Foundation event to wrap up World Space Week, will be the new Colorado Space Heroes Hall of Fame Gala on Oct. 7, an event that celebrates Colorado's contributions to space while raising money for STEM education for the next generation of space leaders.

Learn more about the Colorado Space Heroes Hall of Fame by visiting the website here.