On the Cusp of Apollo 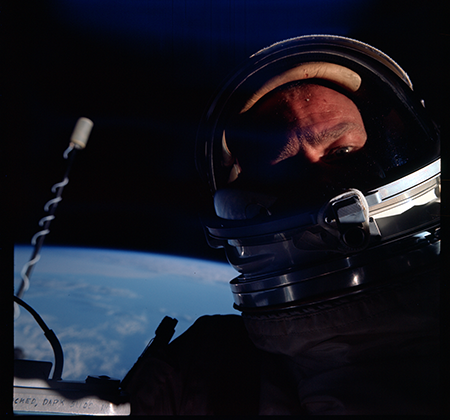 Walking toward their rocket, two astronauts had signs taped to their backs. Instead of victims of a “Kick me” joke, the astronauts were the joke perpetrators with one sign displaying the word “THE” and the other the word “END.” The astronauts and jokers, James Lovell and Edwin “Buzz” Aldrin, were to be the last astronauts to fly in NASA’s Gemini Project.

This November activity in 1966 was the last Gemini mission, Gemini XII. After this mission, NASA astronauts would be launched aboard Apollo program rockets on Apollo missions. Astronauts, support crews, engineers, and scientists had learned a lot from Gemini, including orbital communications, rendezvous and space docking between two spacecraft, and spacewalks. Gemini XII’s Lovell and Aldrin (pictured right) were going to do more of the same, attempting to place a nice bow on all the lessons learned during Gemini for Apollo.

Launched in the second week of November, Lovell and Aldrin quickly located their rendezvous and docking target, a Gemini Agena target vehicle (GATV) launched earlier in the month. An on-board radar failure caused the crew had to rely on older backup techniques and processes, a sextant and cooperation with ground control, to conduct rendezvous and docking. They successfully caught up with the GATV using these techniques and docked with it. The astronauts practiced docking and undocking a few more times during the mission.

The spacewalk, or extravehicular activity (EVA), was the mission’s highlight. Previous Gemini EVA’s had shown how difficult it was for astronauts to move in space. Gemini XII hoped to prove that an astronaut could not only move in space, but also conduct work. Aldrin was the one to go outside the spacecraft and do the work. He did this three times during the Gemini XII mission, managing to even wipe the capsule’s window with a cloth during the second EVA. Aldrin spent a total of five hours, 30 minutes, outside the spacecraft. He did not face any of the challenges prior astronauts had come against during their EVAs. NASA was learning how to walk and work in space.

After nearly four days, the astronauts came back to Earth, safely. This was the tenth manned Gemini mission. All manned Gemini missions had come back safely during the project’s execution. But now it was shutting down and making room for Apollo, NASA’s most ambitious series of missions targeting the moon. NASA’s astronauts and teams had reached the end of the bridge to Apollo, using Mercury and Gemini.