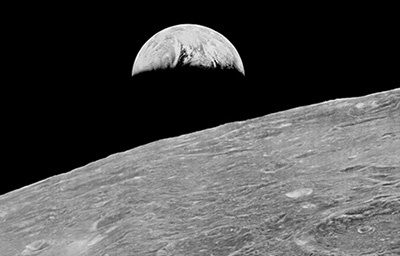 The Space Foundation’s remembrance of the events leading up to the Apollo 11 mission continues with this article by Space Foundation Senior Analyst John Holst about the Lunar Orbiter Program satellites.

Moving quickly across the Moon’s surface, an object, looking somewhat like a toy spinning top lying on its side, transmitted streams of information back to Earth. The transmissions contained detailed photographs of the Moon’s surface, and fulfilled one of the main objectives of the Lunar Orbiter 1 (LO-1). Launched on August 10, 1966, LO-1 was the first of five Lunar Orbiter Program satellites to orbit the Moon. All of the program satellites were created with the goal of imaging as much of the lunar surface as possible.

Slightly smaller than a family refrigerator, LO-1 skimmed the Moon, orbiting the lunar target at an altitude as low as 46 kilometers (28.5 miles). LO-1 orbited close to the Moon, taking detailed pictures of particular areas of the Moon’s surface–about 1 to 2 meters (about 3 to 6.5 feet) in resolution (currently, the most capable commercial satellite can take 30cm (nearly 12 inches) resolution images of the Earth). Among the high-resolution images from LO-1 were pictures of potential landing sites for the Apollo missions. The images helped NASA decide whether the selected locations were safe enough for landing astronauts.

The Lunar Orbiter Program’s missions also helped train people in operating NASA’s Manned Space Flight Network. The network would be used to communicate with, and track, Apollo capsules orbiting the Moon, and its operators gained hands-on experience while monitoring LO-1, obtaining crucial knowledge to be used for the Apollo program. The daily communications and tracking helped create or update procedures, find potential problem areas, and identify possible equipment and software requirements for the Apollo mission.

LO-1’s mission duration was short: about 30 days. NASA’s analysts pored over more than 400 of LO-1’s transmitted images, which also covered 5 million square kilometers (2 million square miles) of the Moon’s far side. Some of the photographs helped NASA in deciding to eliminate a few landing sites. But one set of photos in particular drew notice, not just from NASA’s scientists and engineers, but from around the world. In NASA’s usual dry descriptive text, LO-1 had “Obtained the first oblique photos of Moon and the Earth as seen from the vicinity of the Moon.”

The images provided humanity its first glimpse of Earth as seen from the Moon while the Earth rose above the Moon’s horizon. “Earthrise” was harbinger to the promise and excitement of NASA’s upcoming lunar missions. One day soon, astronauts would walk the surface of the Moon, and experience an Earthrise in person.