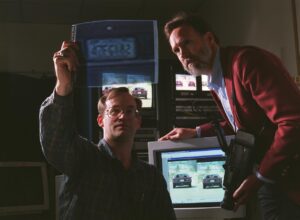 Dr. David Hathaway and Paul Meyer of the NASA Marshall Space Flight Center have worked on several criminal cases with the police and the Federal Bureau of Investigation (FBI). Hathaway, a solar physicist is usually busy studying images of violent explosions on the Sun and Meyer, an atmospheric scientist, examines hazardous weather conditions on Earth. The scientist’s foray into the world of forensics began when they helped the FBI analyze video of the bombing at the 1996 Olympic Summer Games in Atlanta. Hathaway and Meyer successfully clarified videotape images made with handheld camcorders, revealing important details about the bomb and the explosion.

The NASA researchers – using their expertise and equipment for analyzing satellite video – created a new technology that can dramatically improve images including crime scene videos. Dark jittery images captured by home video, security systems and video cameras in police cars are turned in to clearer, stable images that reveal clues about crimes. In addition to removing noise or “snow” from videos, the technology also corrects for horizontal and vertical camera motion, as well as rotation and zoom effects. It produces clearer images of moving objects, smoothes jagged edges and enhances still images. Since their first case with the FBI, Hathaway and Meyer have worked over the years to refine the VISAR technology, improving it so that it could be transfered to companies that produce video enhancement systems for law enforcement, military and even home computers.

Intergraph Government Systems licensed the VISAR software and has used it to produce a graphic analyzer product for the law enforcement sector. BarcoView has a license from NASA for hardware applications of VISAR. Incorporation of their commercial technology into various products will enable real-time applications of video stabilization. For example, it could be incorporated into video cameras to reduce or even eliminate jiggle and also to enhance viewing of single frames.