In 1979, four countries came together to develop global approach to satellite based search-and-rescue. The United States, France, Canada and the Soviet Union agreed to jointly develop a worldwide system.

By 1985, that global system known as Cospas-Sarsat was fully operational. Since its inception, this satellite based system has rescued more than 32,000 people.

To further improve signal location accuracy NASA led an effort to create what became the Distress Alerting Satellite System which incorporates search and rescue instruments on GPS satellites in mid-Earth orbit. This new system embedded the GPS location in the signal itself, eliminating Doppler calculation for faster identification and rescue.

With each generation of Cospas-Sarsat technology, commercial partners have contributed hardware and technology to support development and ongoing operations.

Today some 41 countries participate in the operation and management of Cospas-Sarsat. This is a truly international effort with new ground stations and satellites continuously being added to provide a dependable redundancy and improved response to the over 1 million beacons in use worldwide. 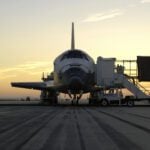