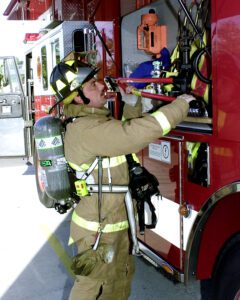 In the early 1970s, the Johnson Space Center (JSC) undertook to adapt and apply technology developed for portable life support used by Apollo astronauts on the moon in a significant effort to improve firefighter breathing systems. This effort was in response to a need expressed by many of the nation’s fire chiefs. What emerged four years later was a breathing system weighing slightly more than 20 pounds (about one-third less than prior systems), and a reduced profile design to improve the wearer’s mobility.

This improved NASA breathing system also included a new face mask design allowing greater peripheral vision, a frame and harness which shifted the load to the wearer’s hips resulting in more comfortable weight control, and an air-depletion warning system. After extensive testing by JSC, field testing followed in 1974-1975 by the fire departments of New York (the nation’s largest), Houston, and Los Angeles. After completion of the tests, the New York City Fire Department became one of the first to adopt the new technology. The NASA improved firefighter’s breathing system has now been adopted and used by firefighting companies nationwide. As a result of these lightweight breathing systems, inhalation injuries to firefighters have been drastically reduced.