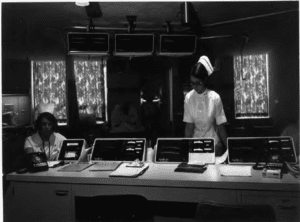 Founded in 1958, Spacelabs Healthcare approached NASA with their concept of a real-time system for monitoring astronauts’ vital signs while in orbit, including a telemetry system to simultaneously transmit the data back to Earth.

From 1962 to 1967, Spacelabs was awarded NASA and Air Force contracts to develop this system, which was first used by NASA during the 1965 Gemini IV mission when Ed White wore it during his first-ever American spacewalk. Likewise, when Neil Armstrong was the first man to walk on the Moon in 1969, he was wearing Spacelabs health monitors and telemetry.

After the system was successfully used in space, Spacelabs developed a similar system that could be used commercially by hospitals to track patient health and recovery. Today, Spacelabs Healthcare produces a whole line of healthcare monitoring and telemetry systems that are used in hospitals all over the world.